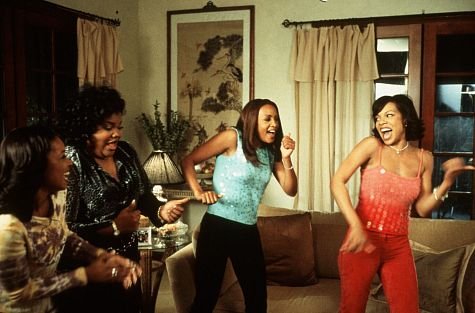 Back in 2001, there was this little jewel released in the movie theaters by the name of “Two Can Play That Game”. During this time movies that catered to the black community and showcased many black actresses and actors were arriving it seemed, every other week. Featuring an overflowing basket of acting talent that included Vivica A. Fox Morris Chestnut, Wendy Raquel Robinson, Anthony Anderson, Monique, and Tamala Jones, “Two Can Play That Game” is a movie that was predestined to be a hit because it covered the relationship blueprint that is enacted when a man does something that makes a woman question whether or not, he is really “the one” for her. I will admit, this movie is one of my all-time favorites. I can quote chapter, verses and wardrobe selection without batting an eyelash. After viewing the Unsung Hollywood story of Vivica Fox this week, I had to pop “Two Can Play That Game” into the DVD player for the 12984 time. While thoroughly enjoying myself watching the movie, I contemplated whether the 10 day plan Smith, Shante Smith coveted in the movie could work in 2015.

Day One: Do not take his calls. If you decide to, be brief.

Day Two and Three: Occupy your mind and time by hanging out with your friends.

Day Four: Continue not to talk to him.

Day Six: Not as bad as day five. However, this day is where you stay busy and occupy your time.

Day Seven: Turn the tables and knock him off his feet.

Day Eight: Stock up on groceries.

Day Nine: Kick back and wait for him to beg for forgiveness.

More often than not, if you go through all this drama in dating today, there will be no Hollywood ending. If your man does something that threatens to damage the foundation of your relationship, you need to open your mouth and tell him. You cannot use silence, go on dates with men you would never be bothered with on any other occasion, use temptation or tricks to punish him for messing up. You have to be bold enough to have a conversation with him, whether you want to or not. The ability to communicate your hurt without damaging the other person’s spirit is learned behavior. No-one is born with this skill. So, if you get it wrong the first time, keep at it. Relationships never succeed when one person believes they are the ruler and their other half is the peasant. In the end, two can indeed play that game. However, who really wants to?

3 thoughts on “Two People, Ten Rules and One Basket of Foolishness”

The nerve to feel your convictions. The courage to say what you're thinking. The bravery to write your heart. The fearlessness to speak, loudly.